At the Captured Tracks fifth year anniversary show, way back in 2013, I felt like I had stepped into a page of my middle school yearbook. I was surrounded by twenty-something concert goers in black, spaghetti strap dresses with large floral prints, acid washed “mom” and “dad” jeans, and platform soled Doc Martens. “Where do they even find these clothes?” I asked my equally baffled thirty-something friends.

Four years on and Nineties nostalgia is still in full bloom. Champion has a line of color saturated sweatshirts in Urban Outfitters. Overalls are everywhere. Dark florals are still in. So is dark lipstick. I’ve been caught up in it as well, eagerly paying top-dollar to see reunion tours by bands like Ride and Slowdive, bands I would have never had a chance to see “back in the day.” I’ve celebrated reunions by bands I loved, both obvious, like Sleater-Kinney, and obscure, like the Casual Dots (who were more early 2000s, but featured Nineties luminaries like Toby Vail and Kathi Wilcox of Bikini Kill).

I started to wonder if I’d never be as cool again as I was “back then,” even if “back then” I was hardly cool and wince a little when I think about it. I spent the latter half of the Nineties mail ordering records from Kill Rock Stars and K Records in distant, exotic feeling Olympia, Washington. With the records came zines and with zines came a world of other young women like me, both distant and accessible through a letter and a stamp and maybe some concealed cash for their latest photocopied issue.

One of those zines was Chickfactor. It was always printed on high quality paper in a monochrome color—maybe pale blue or muted burgundy—instead of black and white. I read it sitting on a purple vinyl beanbag chair in my bedroom in Maine feeling hopelessly removed from the cool backyard shows and parties in Olympia and London that the editor, Gail O’Hara, chronicled. 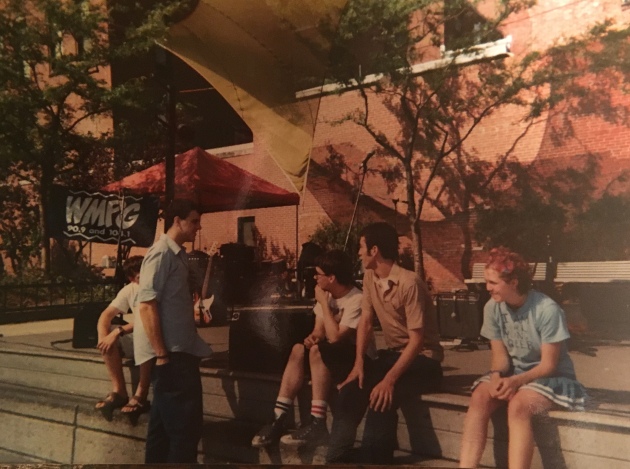 A blue and white cheerleader skirt had pride of place in my wardrobe from 1998 to 2001.

It’s easy to romanticize those days: staring out over the hay fields that surround my parents’ house, pecking out my teen angst on a manual typewriter (while now I stare out over the trees of Sunset Park in Brooklyn and type on my thirty-something angst on my MacBook), assembling the most Riot Grrrl outfits I could find from local thrift stores, dying my hair with goopy Manic Panic, belting out very obvious political songs and hoping my band would be the next Sleater-Kinney or, at least, Cub.

I dreamed of distant worlds where there were other girls like me: who were queer, loved punk, and were passionate about feminism. In reality, I did have other young women like this in my life in Maine, but through those records and zines, weekend trips to Boston and New York City, and a three-week trip to the Pacific Northwest in 1999, including a stop at the Yo Yo a Go Go music festival, I felt like this world existed elsewhere. I was already nostalgic then, feeling like I’d missed the golden age of indie rock and Riot Grrrl. 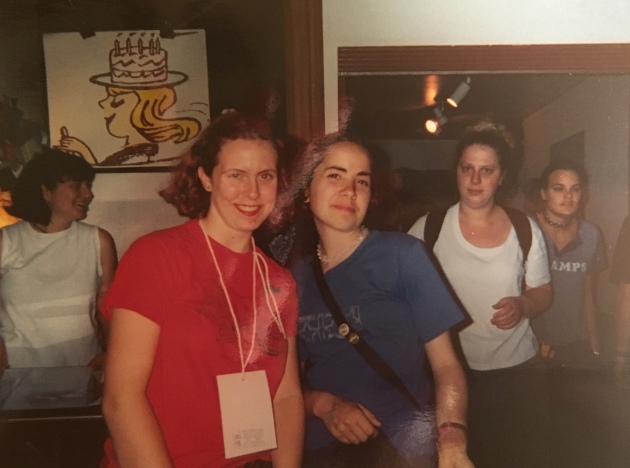 Me and Keight at Yo Yo a Go Go 1999. We were really excited because Rose Melberg of The Softies was in the background of this photo (left side).

It’s autumn now and I feel like inevitably nostalgia courses through my veins. I try to resist it and remind myself that there’s still adventures to come and friendships to be made and deepened, but it keeps scratching at me. I don’t want to go back to my teens and twenties. In reality, I spent a lot of those decades depressed and lonely, despite the friends I had and the communities I built. But I think there’s a part of me that mourns the sense of possibility that now feels closed, or, at least more difficult to achieve.

Kicking Giant performing at the Capitol Theater in the early 1990s.

Kicking Giant was a band that orbited around my record collection. I loved The Need, Rachel Carnes carnivalesque, queer-core post-Kicking Giant band. After I heard Kicking Giant on a variety of Yo Yo a Go Go and Kill Rock Stars compilations and “She’s Real” on countless mixtapes, I ordered a cassette of Alien ID, their 1994 album from K Records. Tae Won Yu’s album artwork always stuck with me, a collage of photography, lettering, and cut paper, silvery and enticing on Alien ID. I wore out the tape and accidentally left it in the sun in the backseat of my mother’s car, where it warped and melted. I was thrilled when, about ten years ago, I found a used copy of the record on vinyl. Circumstances beyond indie rock had brought Tae and I together as real life friends and I gleefully showed him my copy of Alien ID, found scouring Brooklyn used vinyl bins. He smiled uncomfortably, perhaps not totally at ease with the past I was waving in his face.

The other week I attended Chickfactor’s 25th anniversary show. The first show of theirs I attended was in 2012, for their 20th anniversary, and then another show in 2014. The anniversary shows felt less like exclusive-cool kid parties and more like exuberant reunions full of warm hugs with occasional ghosts of indie rock past floating by. It’s heartening to see people who are still invested in making music and culture and also building their lives and friendships as we all get older. It feels like a welcoming class reunion that I actually want to attend. Or as I said, “Everyone looks how they did in 2001, except older!”

And the bands. Bands I never thought I would see again that were essential parts of my listening and my life: Aislers Set, Small Factory, Lois, Lilys in years past, and this year, Kicking Giant. 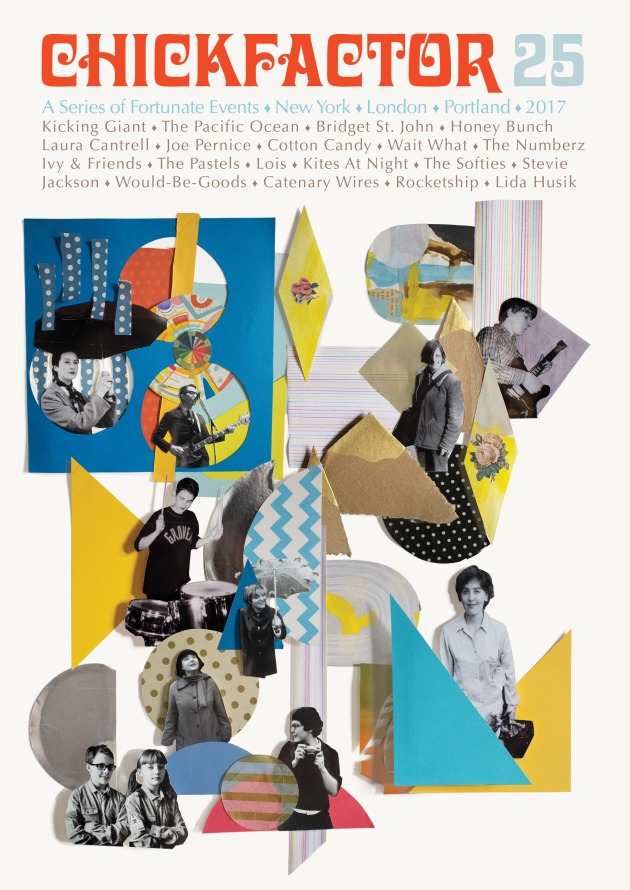 When I entered the show I immediately sat down on the pleather banquette outside the Union Pool show space to chat with Tae. The show corresponded with the re-release of This Being the Ballad of Kicking Giant, Halo: NYC​/​Olympia 1989 – 1993, a double vinyl lovingly remastered and featuring a gatefold cover Tae exquisitely designed. It’s a classic mix of photos, illustrations, reminiscence, and typography, starting when he met Rachel at Cooper Union while she was wearing an Einstürzende Neubauten t-shirt. The record goes well with Tae’s Summer Guitars Instagram account, where he surfaces photo he took in the Nineties in NYC and Olympia. In gushing over and enthusiastically liking these photos, small documents of a scene I always wished I had been part of, I realized this all could seem like another layer of Nineties nostalgia. My Nineties experience was so different—more about what I wish I had then what I actually did. Maybe that’s how kids now feel when they look back at the bands we were in or went to see play back then. As Tae and I chatted, we talked about the balance of honoring who we were,  appreciating where we are now and where nostalgia fits.

“I realized that these moments made me part of who I am now,” said Tae. “It’s not a past that’s over, but one that lives on through us every day. These choices we made then influence the people we are now.”

With his words, I felt my simultaneous feeling of “I’m so sad these days will never come again” and “I’m so embarrassed at how flailing and overtly sincere and how much of a mess I was” evaporate. I felt the way I think about my past shift. I’m often shamelessly revisiting it and mining for material as a non-fiction and memoir writer, especially for my next book which is all about my evolving relationship to feminism, starting with my discovery of punk and Riot Grrrl.

A more recent photo (2013?) of Me and Tae being a band of “stoic New Englanders” with my fellow Mainer Nate W.

Instead of something to avoid or apologize for, Tae’s comment was a good reminder that our past choices live on in us and, as messy as they may have been, got us where we are today. I’m still friends with many of the girls and women I met through zines and music back then and some of them have been or still are roommates, best friends, and coworkers. There’s a way to look back that’s about appreciating, honoring and accepting ourselves then and ourselves now.

I realized that, of course, I’m still making choices about how I want my life to be and the best thing I can do is appreciate all parts of who I am and feel proud of it, recognizing we always have more we can learn and become.

Oh, and, the Kicking Giant record is jangly, experimental, sincere, catchy, full of crunchy guitars, and frankly, fresh. It sounds like it could have been made yesterday and not just because all these sounds are back in. You should pick up a copy and revel in it. The boldness and bravery of these sounds and this duo for making them. Bravo to Tae and Rachel for creating music then and now that fits perfectly with my life.