Driving back to New York from DC after the women’s march I wore my “Capitalist patriarchy is ruining the world and all I got was this lousy t-shirt” shirt. I was exhausted, exhilarated, and wondering what comes next, like so many others who attended. I personally found it, overall, to be an uplifting display of intersectional feminist organizing from the march committee themselves. It was clear that some of the groups around me, young people of color of many genders chanting “Black Lives Matter,” a group of Arab women wearing pussyhats headscarves carrying a sign that read “Teachers Against Trump,” and a band of radical queers, felt fully the march was for them.

Other marchers I’ve talked to have felt like the march was catering to suburban white women who felt accomplished and left a mess for women of color to clean up. There are many realities and interpretations of the march, but what we’ve seen from the new administration post-march demonstrates that, as we knew, the march was just the beginning. We need to stay critical, keep acting, and keep practicing intersectional feminism more than ever.  (If you are interested, I contributed to a great round up of march experiences for Weird Sister if you want to hear different perspectives.)

But where to next? I started writing this blog post in the late summer of 2016 at a coworkers request that I help her “be more feminist.” At the time I started to compile this list I was naive enough to believe that feminism was a unstoppable cultural force that was reshaping everything from our electoral politics, to the workplace, to popular culture, to reproductive rights, to yes, how we dress with cool t-shirts. None of that masked the deep misogyny, combined with racism and homophobia that runs throughout American culture, but I honestly thought that intersectional feminism as a practice was gaining mainstream traction throughout the country.

Now that misogyny, and all forms of hatred, have been given free reign from the highest office of the country, practicing an expansive, inclusive, intersectional feminism is not only necessary, but imperative. To continue to have a tangible impact, feminism must not be just an identity, but an active practice. It’s a philosophy that guides action.

I am not a perfect feminist. I think the idea of not practicing feminism perfectly stops a lot of people from identifying and aligning themselves with feminism. The beauty of feminism is that it is evolving and my practice of it has evolved as well. For all wondering “where to next” or “How do I keep practicing feminism through these scary times” this list is meant to be an inspiration and a push from a kindred spirit, not a definitive prescription. It is full of ideas that I hope will inspire action both big and small in the days ahead.

Also, quick note here, I do use the term “women” and “woman” throughout this piece, but believe it applies to anyone who identifies as a woman. Feminism can and must be practiced by all genders!

If you are looking for concrete ways to get involved, here’s a few places to start:

The ACLU is working on a broad range of civil liberties issues, including women and queer people’s rights, and in New York City organizes volunteer trainings specifically focused on fighting sexism 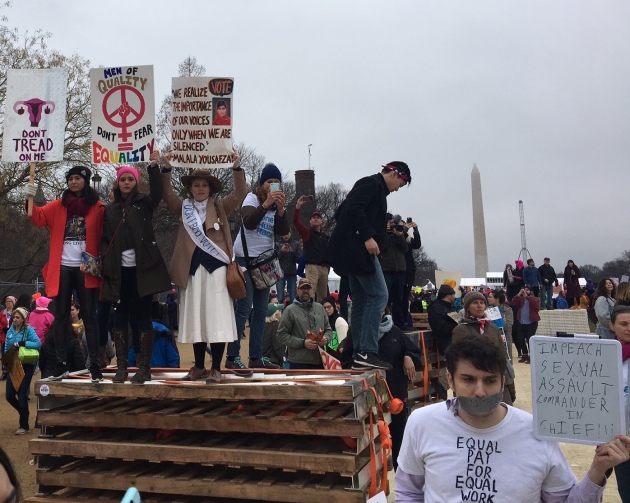 One thought on “Intersectional Feminism or Bust: A guide to being a Nasty Woman in Trump’s America”