Francophile that I am, I have somehow ignored the fact that a mere eight hours to the north of me is a city that is seeped in French history, culture and language, but also is a solid part of North America. I am, of course, speaking about Montreal. As you approach Montreal from the highway, whether in a car or on the Greyhound bus, the city rises above the agrarian plain of southern Quebec like a dream. It’s hard to imagine that this far north after traversing the mountains of Vermont and the fields and farms of Quebec, that a city so cosmopolitan and radical is there existing and waiting to welcome those of us weary of the United States.

While I’ve been to Montreal twice before (and loved it each time), my visit a few weeks ago was the first time I got to immerse myself in a Francophone community thanks to my generous French hosts who were living there for a year from France. I learned quickly that there are three overlapping, yet separate, communities in Montreal: Anglophone, Francophone from France, and Quebecois. Montreal exists at the intersection of these three  groups and fantastic things happen there linguistically. Quebec is a French-speaking Province, but English is a second language in Montreal. By law everyone must utilize French in public until you determine you are both Anglophone and then you switch. This means that everyone speaks some kind of French and no one judges you for your accent. My accent was called “German,” which I found exceedingly charming. Montreal is low-risk French speaking and the French that is spoken is generally tempered with a North American accent. Overall, everyone has a good feeling about Montreal, whether they speak English or French and come from other parts of Canada, the United States, or Europe and Montrealites are very proud of their city. 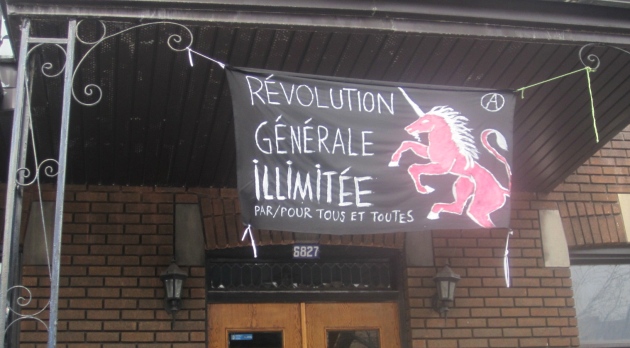 Montreal is a nexus of good eating. I skipped the gourmet options, like Au Pied de Cochon, and went straight for the everyday fare. My favorite by far was Depanneur Le Pick Up. A depanneur (or “Dep” for short) is the Montreal equivalent of bodega, corner store, convenience store, or epicerie, depending where you come from. However, in its magazine rack Le Pick Up carries zines and DIY albums, its coolers are full of natural soda (including a Pine Sol-like tasting Spruce variety), and it includes a lunch counter and outdoor tables and services a killer weekend brunch and huge, tasty sandwiches, including pulled pork in both authentic and vegetarian versions.

Thanks to Aurelie Letizia and Danisha, two lovely blogeuses mode et beaute, I spent a lovely, girly, brunch at l’universal, talking about WordPress, fashion week, and sharing news about other blogueses. The fast friendship and camaraderie reminded me a lot of meeting up with zine pen pals over ten years ago and it is a wonderful feeling to build an international community. The brunch at l’universal is also full of delicious eggs, home fries and comes with a side of fruit salad.

Beyond that I couldn’t help but make a stop at St. Viateur Bagles (no one can come to Montreal and miss this!). Montreal bagels are smaller and less chewy then New York-style bagels. They have a lightness to them (for a bagel) that I love. I also had a coffee and sandwich at Le Caigibi, which offers great vegan treats, and sampled Montreal’s response to the cupcake craze at Petits Gateaux.

I also could not miss poutine, which is practically the national dish of Quebec, though somehow I did not eat this Canadian comfort food of fries, gravy and cheese curds the last two times I visited. For a gourmet, Scandinavian twist on traditional poutine we were recommended by one of my Instagram friends to try Cafe Ellefsen.

I got a poutine with Swedish meatballs and fresh, local cheese, which made it less heavy than the average poutine and served in a light, airy environment. We also had some lovely drinks at Notre Dame de Quilles, which is either a bar and restaurant that has a few bowling lanes (where you reset the pins yourself and they are candle pins, for all of you northeasterners out there!) or a few bowling lanes with a bar attached, depending how you look at it. “Quilles” is “Bowling Pin” in Quebecois, by the way.

Despite promising myself I wouldn’t shop very much, Montreal is a shopping paradise if you like handmade, quirky things and cutting edge fashion. I got my Canada-made fix at General 54 in Mile End, which features all Canadian designers, and has a vintage annex next door. It is owned by Jennifer Glasgow, whose designs I love and whose perfectly on-trend yet timeless shirt I showed off in my last entry. At the very trendy Bubbles Boutique I picked up a fancy vegan wallet by Montreal-based eco-couteuriers Matt & Nat, which I think will serve me well.

While wandering around Le Plateau and Mile End I got my book fix in French and English when I dropped by the Drawn and Quarterly bookstore.  I’ve admired the comics and graphic novels they have put out for years and loved the selection of fiction, theory, graphic novels and cook books they had on offer at the shop. I also went to Librarie Le Port de Tete for art books, mini comics and livres en francais. 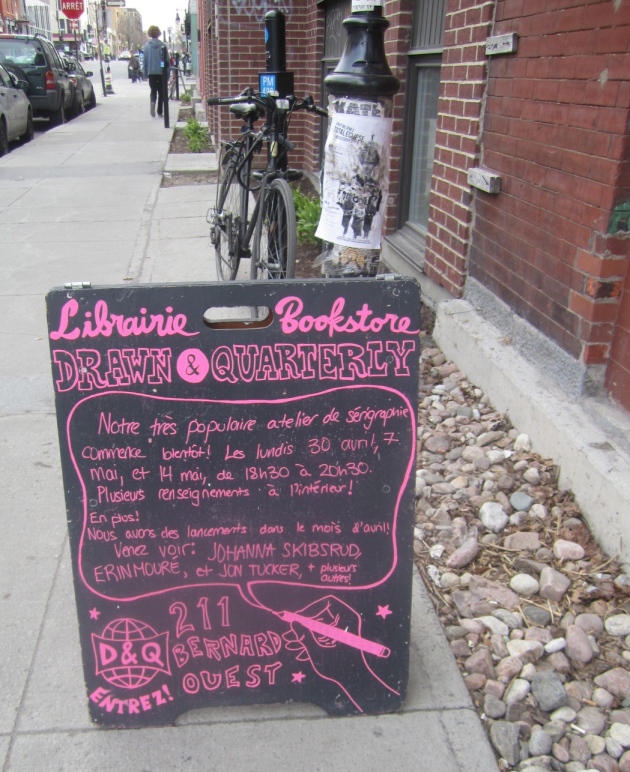 Showing off my new “Lesbian Haircut for Anyone”

Montreal is a mashup between languages, people and cultures and because of that it is an extremely open, welcoming place. Identity is strongly asserted, but everyone is welcome to participate. For example, I booked a “Lesbian Hair for Anyone” (or “coup de cheveaux lesbien pour n’importe de qui”) with JJ, who is also a very talented artist and photographer. I also got a haircut from JJ on my last visit to Montreal in 2007 and both of these haircuts have been among my favorites! I also participated in a “Dance Workshop for Anyone” that combined yoga, modern dance technique and improvisation and will culminate in a dance video! Here’s a video of the first workshop and I will be sure to share the resulting video when it’s available.

Kawaii: Don’t the their name fool you, they are punk as f*ck

Finally, I couldn’t talk about Montreal without talking about the vibrant art and music scene there. I had hardly stepped off the Greyhound bus than I found myself at a house party listening to fantastic experimental bands and accidentally insulting a member of Dirty Beaches. There’s also a lot of French from France musicians and artists living in Montreal searching a vibrant artistic community. I was lucky enough to meet Minnie, the talented singer in Eliote & The Ritournelles and see my hosts band Kawaii play (despite their name, they are not cute, they are the punkest music you will ever hear made from toys). Finally, we went to Blue Sunshine, which is a soon to be ending cinema in an apartment building showing everyone from salvaged VHS classics (er, trash?) like “Ghoulies 3: Ghoulies go to College,” or (as we saw the night we went) rare shorts of historical and educational films centered around Montreal. They are closing on May 19, so if you love independent cinema in unconventional settings, go! Now!

I miss Montreal already and can’t wait to back. How did five years pass between my two trips? It hardly seems possible. Also, quick tip for New Yorkers: if you can’t stand eight hours on a Greyhound bus or the prices of flights to Canada try this: fly JetBlue to Burlington, Vermont and then catch the Greyhound to Montreal (it stops at the airport). There’s also an amazing diner, Arcadia, within walking distance of the airport if you have over an hour to wait. They serve real maple syrup with their pancakes at no extra cost. Montreal via Burlington is cheap, fast, and more relaxing.

Breakfast at the Arcadia Diner counter in Burlington, VT

My pictures, sadly, look less than great and I learned an important lesson: even if it takes up a lot of space, if you are leaving home and want to take pictures do not leave without your DSLR!