Sunset over the Pacific, Carpinteria

I’m prone to saying, “I don’t know anything about California.” It’s a bit wrong of me. My Aunt and Uncle live there, I’ve visited multiple times, and I’ve read Joan Didion and Rebecca Solnit and all those authors that capture the elusive golden state so eloquently.

I think it’s not that I don’t know anything about California, but that it is so outside of the realm of the geography and culture that I’m surrounded by that it feels foreign to me. Earlier this fall, while summer was still hanging on, we turned a Labor Day weekend wedding into a chance to explore the California coast. It was also a chance to realize one of my lifelong dreams of driving up the Pacific Coast Highway through Big Sur.

We flew into Santa Barbara and not one hour after we had landed we were sitting on the beach eating fish tacos and staring at the pacific. It felt completely unreal.

My Nolita and sneakers chilling in the Cali sun

California was everything I heard it was: sun and sand, the wild west and wild surf. Wine, oysters, farms, incredible landscapes, and fresh produce that was out of this world. The light, as the name promises, was bold and golden. The pacific was wild, turquoise, vast and cold.

Morning on the beach in Carpinteria

One area that I was glad to discover, which I had absolutely no idea even existed before, was the wine region just a little north and east of Santa Barbara in the Santa Ynez valley. It’s dry and hilly and fully of quaint small towns and vineyards and good food. It was the perfect place to spend a few days and celebrate our friends’ wedding.

The morning after the wedding we pulled our heads out of post-celebration fog and drove into the actual fog to take the six hour drive up the coast to San Francisco. I’ve always wanted to drive on the mythic Pacific Coast Highway, which hugs the edge of the American Continent from Los Angeles to Olympia, Washington. I imagined hairpin turns and sweeping pacific views. There were plenty of hairpin turns, but due to the the persistent fog the pacific  resembled a white, endless void to our left as we crept north.

Elephant seals lounging on a beach along the PCH

There’s a perceptible change of culture and geography between southern and northern California. As we drove I saw sandy beaches give way to rocky cliffs and meadows that rolled down to the ocean turn into dense forests full of evergreens. The fog and wind were constants though. We ended up in San Francisco, full of beautiful Victorian architecture, good friends, delicious food and strong drinks. We even waited for two hours to have dinner at the Anchor Oyster Bar, a classic seafood restaurant in the Castro that was worth every minute of those two hours. I felt my life reaching a new stage of completeness after I ate their crab Cesar salad. 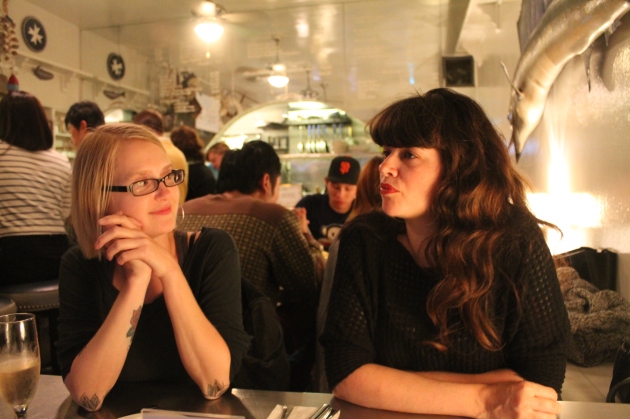 The next day we went even further north on highway 1 to Point Reyes to take in the forests, mountains and beaches. We also wanted to meet some oysters in person and our drive took us on a quest to find Hog Island Oyster Company, which was featured on Eric Ripert’s program Avec Eric.

Oysters fresh from the source at Hog Island Oyster Company

Hog Island Oyster Company is every locavore’s dream. It features an outdoor oyster bar where you can look at the bay where your meal was pulled from that morning, the beautiful view adding to the fresh brininess of the shellfish.

From sandy beaches to rocky shores, I feel like I packed a lot of the California coast into a short trip. Though I still can’t quite get my head around the idea of California, I think I can no longer claim to “Know nothing about it.”