As a way to torture myself a little bit I loaded LA weather on my phone, so the other day when it was twelve degrees in New York City I could console myself with sunnier thoughts, knowing it was in the 70s in Los Angeles. Thankfully, winter can also be a great time to score cheap plane tickets, so when round trip prices from JFK to LAX dipped below $300 snagged one for a long weekend in the city that is my current source of infatuation, just in time for the first annual LA Art Book Fair.

I made time to visit my (new) favorite haunts in Silver Lake and Echo Park and to see friends, but also to explore more nooks and crannies of this sprawling metropolis. After a walk at the Baldwin Hills Scene Overlook and coffee to shake off my jetlag on Friday morning I headed downtown for the art book fair, which was being held at the Museum of Contemporary Art’s Geffen Building. As is the nature of these events I was immediately overwhelmed with bound creations and intriguing exhibitions, but I especially loved the “zine world” section of the fair and hope that one day I too could be considered a “zine master of the universe.”

In “Zine World” at the LA Art Book Fair

I also feel like this trip gave me more chance to talk with artists, writers and creative types (outside of the film biz) who are making their lives and work in LA. I was especially excited to meet Mimi of the architectural zine and blog Loud Paper who recently moved from Brooklyn and was working the table for the LA Forum for Architecture and Urban Design, whose dayglo posters with quotes from LA architects and planners drew me from across the room. I also noticed some general trends in art books and zines at the fair: neon as an accent color was hot, everyone had a tote bag for sale, and about half of the zines available had some kind of homoerotic content (mostly male).

The poster on the upper right is now mine!

Friday evening coincided with (my) discovery of some of the restaurants and bars of the “Arts district” downtown (which may or may not have any actual artists still living there), with delicious continental beers at Wurstkuche (though I passed on the rattlesnake sausage they had on offer) and a suburbly proportioned, locally sourced dinner at Eat Drink Americano. Later that evening at the Satellite I discovered a new favorite band: the Happy Hollows, who enthusiastic delivery was matched only by the crowd’s enthusiastic reception. After New York’s jaded rock audiences, seeing the Happy Hollows and the warm crowd at the Satellite was a welcome change.

I started my Saturday with a lovely walk in Griffith Park and a pass through the Silver Lake farmer’s market for a coconut, kale and dandelion green smoothie. I later took a wander around West Hollywood, including a glance inside the beautiful new library, and had a wonderful chat all facilitated by Team Gloria, who is my constant source for writing and lifestyle inspiration. After a delicious, lingering brunch conversation about writing, zines and life in LA with Liz at Barbrix in Silver Lake I swung back by the book fair. I was so exhausted by the artistic possibilities I saw I had to take a nap before braving the freeways to Orange County.

Torches at the Constellation Room

As if my LA weekend couldn’t get any dreamier, my friends Torches let me know they were playing a last minute (and sold out!) show in Orange County at the Constellation Room. Despite my culture shock of finding a decent rock club in the middle of a suburban office park, to see Torches on their (sort of) home turn in Southern California was a dream come true. It was really fun to hear their new material, meet their new bassist Braedon, and see a whole group of fans gaze at them adoringly. The newer material rocks a little harder than the songs they played in NYC this fall and their set was full of pop hooks and great vocal harmonies and tremendous drumming by Eric. You can get a taste (and download a new track!) on their Soundcloud page.

Azad and Braeden from Torches at the Constellation Room

Sunday was a complete change of pace with a drive up the Pacific Coast Highway, through Malibu, to hike down a canyon at Circle X Ranch, an outing carefully orchestrated by my friend Phoebe and accompanied by my gracious host Kabir. After shuffling along NYC’s icy streets, to be out in the desert sun, smelling spring flowers and marveling at the sandstone cliffs felt like an entirely different world and completely freeing. 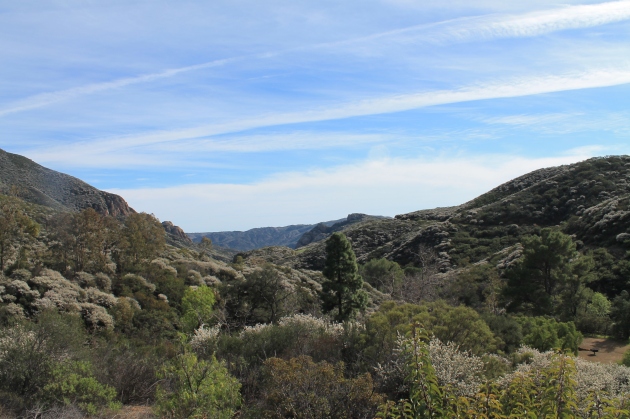 To reward ourselves for our hiking efforts we stopped at Neptune’s Net, a fried seafood shack that is a favorite among the biker crowd. Between perfectly grilled fish tacos, crispy fried shrimp and a glimmering view of the pacific I was completely satisfied. The day was completed by watching the sun sink into the water, followed by a glass of wine and an excellent plate of artisanal cheese at super cute downtown wine bar Mignon.

Along the Pacific Coast Highway

Neptune’s Net, a seafood shack favored by the biker set

Suffice it to say, LA is still casting its spell on me and continues to lure me with all of its charms. I hope I can go back soon.