I’d prefer not to say anything about today. Earlier this week I filled out the New York Time’s interactive map pinpointing where I was on September 11, 2001 (17 Union Square West in my freshman college dorm) and my reflections 10 years on. I chose “unmoved.” I’m not unmoved in that I don’t feel empathy for those who lost friends and loved ones that day. At the most basic, I wish that today didn’t become a big patriotic hullabaloo. I upsets me that it’s just another chance to put our hands over our hearts and say “God Bless America,” and forget about the rest of the world. I’m tired of how this day was turned into an excuse for war, a grab for power, a justification for racism, and a suppression of human rights and civil liberties in the United States and abroad.

Ten years ago I had arrived in New York an idealistic, moody activist  ready for her freshman year at a liberal arts college and ready to fall in love with New York (or at least give the city a chance). September 11th didn’t change that, but it changed my focus. Before the struggle against globalization and the need to undo the injustices of colonialism seemed abstract. September 11th brought them into focus and made me think about the consequences of centuries of oppression. It also made some struggles and concerns pale in comparison. 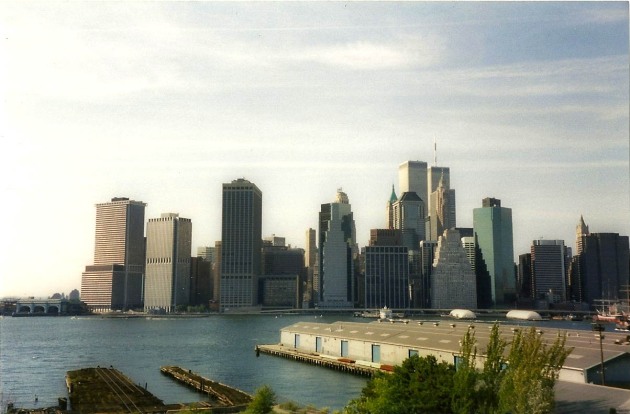 Maybe it’s because I was in Union Square on that morning and I looked downtown and saw the smoke and heard the sirens (and breathed that scorched , chemical laden air for weeks afterwards), and remember the collective gasp that went up when the towers collapsed, but I always felt that September 11th was a tragedy centered in New York.

Ever since that morning I’ve also been both proud of certain responses in this city and ashamed of others. I remember drawing on sidewalks with chalk the night of September 11th 2001, writing, “An eye for an eye makes the world blind.” I remember the huge memorials of candles set up in Union Square. I remember clearly rallies every Saturday at the Metropolitan Detention Center in Sunset Park, Brooklyn (my neighborhood) to demand the release of immigrants detained after 9/11 that were held for months without trial. At the same time, New Yorkers raised huge opposition to bombing Afghanistan and later Iraq.  Most people were speaking out against racism, even while immigration authorities were acting on it. I think the New York Time’s op-ed said it best in the piece What New York Didn’t Loose After 9/11. The larger impulse was towards helping those impacted by the tragedy, not towards revenge, but towards community, openness, and reflection. This is a stalwart city, tough, but one that stands up for its own and (in the best of cases) doesn’t discriminate between who is and who is not a New Yorker. 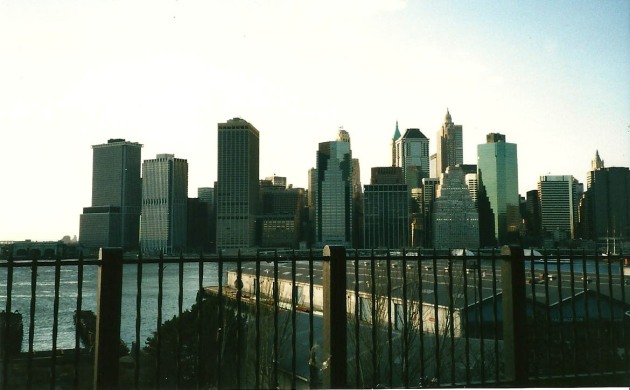 September 11th made me determined to love this city and stick with it through all of the challenges it posed. Ten years later here I am. Today is not one for ceremonies and listening to those in power, and it looks like I’m not alone in this. Today is time for enjoying the life I’ve built here piece by piece, despite the tragedy, despite eight years of the worst president this country has ever known, and despite my own personal roadblocks and frustrations. One of the comments on the New York Times’ map called the past ten years “a lost decade.” I disagree. This decade has been hugely significant to me personally. I went from a teenager to an adult, I struggled, I built my life, and I spoke up, even with such dreary politics and global realities as a backdrop. Today I’ll have brunch with friends, ride my bike along the waterfront and maybe drink a beer brewed right here in Brooklyn. Here’s to you, New York! To your diversity, acceptance, your resilience, and to the people of this city and the world!

Photo in front of my old apartment taken by Leila Bergougnoux in the fall of 2007.

These scrubbed clean, clear blue skies of late summer and early fall remind me that I moved to New York City ten years ago this week. It’s been quite a decade for New York City and for me personally.  I moved here reluctantly to attend college after a dreamy year spent living in Portland, Oregon, working very little and indulging in my creative projects and wallowing in what remained of my teen angst. After growing up in Maine I was dead-set against going to college on a quaint campus and tired of small town life in general. On visits throughout high school to New York City I feel in love. It had it all: art, culture, fashion, food and excitement. It was the polar opposite of where I came from. “Who needs trees?” I said, “The nature in the parks will suit me just fine.”

New York has not ceased to amaze and surprise me, but moving here was not an easy transition. I got sick immediately from the polluted air, the noise from the construction outside of my window seemed to bore into my skull, and then September 11th happened. The events of that day and what followed completely reshaped what I expected from the city, academic, activism, and work. I really can’t talk about 10 years in New York without talking about September 11th and all that came after, but this post really isn’t about September 11th. Let’s suffice it to say this morning the public radio station replayed reporting from that morning and I had to sit down and cry.

I didn’t think I would stay in New York very long after graduation. I decided that I would give it two years after I got my diploma, but when I started working in museums and arts organizations I kept pushing that timeline back, until finally I gave up and decided to stay here. I felt like my friendships and the adult life I’ve been able to construct were too hard won to walk away from. I’ve lived in Sunset Park, Brooklyn since 2002 and slowly the borough worked its charms on me and I feel like it’s an important part of my identity. I also discovered another great thing about New York: its proximity to Europe. Flights to Europe from New York are plentiful and can be cheap if you know how to search.

But looking back over these past ten years I’ve wrote a lot about New York and I wanted to share a little bit of those thoughts to chart how my relationship to the city has changed and evolved.

“You always choose the most challenging position you can think of!” my mother chided me when I moved to New York City to go to college.  “Of course you picked the biggest, toughest, most of expensive city in the US, you couldn’t imagine less!” she reminded me when I lamented how difficult my new NYC life was.  And it was difficult.

In October of 2002 I wrote, “New York is bad posture and holding my breath. Too many aches and tight, sore shoulders and no one to work them out.”

At the brink of the (still ongoing) war against Iraq in 2003 I wrote, “I need to write something about how it feels to be in New York right now – the subway stations full of national guard, machine guns ready. How is it constricting my thoughts and hopes and playing on my fear?”

But the city still entranced me, “For me the magic of New York isn’t in Manhattan, it’s in the strange faraway feeling places in the outer boroughs that you can still take the subway train to. A collision of urban and beach, crashing waves and a $5 ride on the Wonder Wheel. Vacant lots in gentrified neighborhoods, cracking streets, rusting hunks of abandoned junk, weeds in the middle of poshness. It shows the gaps in the idea of glittery concrete and steel and shows that cities have a force that cannot be regulated.”

Full of Brooklyn pride, I wrote a love letter to Brooklyn for the last issue of my zine Indulgence, which I put out in 2008. “If Brooklyn were not attached to the rest of New York it would still be among the largest cities in the United States.  I’ve been living here for six years. That doesn’t make me a local, but it means I have grown to appreciate my borough through all my early-to mid-to late twenties ups and downs. Brooklyn is my immediate reality and my basis of comparison. Brooklyn feels at times just as much like a small town, an industrial landscape, and even, suburban.”

I think it is E.B. White who describes New York best, so I’m going to leave you with his words. My mother gave me Here is New York for Christmas after I’d been living here for 4 years. I was struck by how this little book, written about New York in the Forites, captures the New York I experience every day.

The opening: “There are roughly three New Yorks. There is, first, the New York of the man or woman who was born there, who takes the city for granted and accepts its size, its turbulence as natural and inevitable. Second, there is the New York of the commuter–the city that is devoured by locusts each day and spat out each night. Third, there is New York of the person who was born somewhere else and came to New York in quest of something. Of these trembling cities the greatest is the last–the city of final destination, the city that is a goal. It is this third city that accounts for New York’s high strung disposition, its poetical deportment, its dedication to the arts, and its incomparable achievements.”

“The city, for the first time in its long history, is destructible. A single flight of planes no bigger than a wedge of geese can quickly end this island fantasy, burn the towers, crumble the bridges, turn the underground passages into lethal chambers, cremate the millions. The intimation of mortality is part of New York now; in the sounds of jets overhead, in the black headlines of the latest editions.

All dwellers in cities must live with the stubborn fact of annihilation; in New York the fact is somewhat more concentrated because of the concentration of the city itself, and because, of all targets, New York has a certain clear priority. In the mind of whatever perverted dreamer might loose the lightning, New York must hold a steady, irresistible charm.”

Thank you, Mr. White. And here’s to another ten years.